I get a lot of emails and comments asking me what I use to protect Chester and Gretel’s feet on our snowshoeing and hiking adventures. At first, I didn’t use anything.

When I adopted Gretel, I took her to obedience school to improve her confidence. I was talking to the trainer about all of the hiking we do and mentioned that I had tried boots in the past but they didn’t work.

She suggested a product called Musher’s Secret. It is a salve made in Canada to protect the feet of sled dogs. 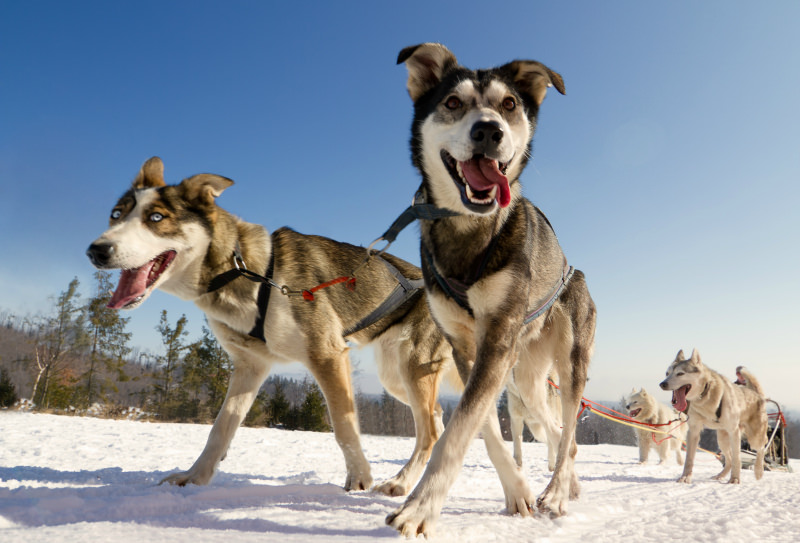 The trainer raved about it and, taking her word for it, I immediately ordered some to try.

When I opened it, I thought it smelled lightly of petroleum. This was a little concerning to me because I don’t like to use chemicals on the dogs if I can help it.

So I took a closer look at the label. Despite the smell, Musher’s Secret is made of all-natural ingredients.

It is described as “a dense, barrier wax that forms a breathable bond with your dog’s paws.  Developed in Canada for use with sledding dogs, it provides tenacious protection even in the most extreme conditions”

The extreme conditions that it claims to protect your dog’s pads from are:

The description says that the paste is “safe, natural [and] made from a blend of several food-grade waxes” and a “safe, non-toxic way to protect your dog’s paws”. 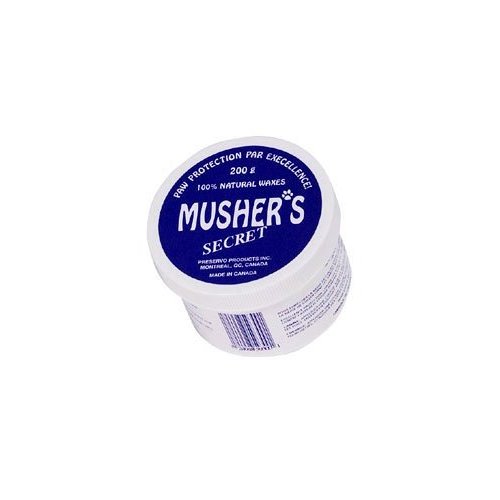 Putting it on their feet proved to be a challenge at first. After a few failed attempts to completely cover their pads or not get it all over myself, I found a system that worked.

I turn Chester and Gretel over on their backs, grab a paw, scoop a grape-sized blob out of the container and then rub it onto their foot (one blob per foot), being sure to work it in between the pads and onto the tips of the nails.

Chester and Gretel don’t seem to mind all of this too much. They liked getting a mini feetie massage and my undivided attention for a few minutes.

I don’t think they are super excited about having smelly stuff (the smell does go away shortly) on their paws because they do tend to lick their feet a little after. The product says it is non-toxic though so that doesn’t worry me.

Of note is that, since it is designed to absorb quickly into the pads, it is not supposed to stain. However, I bet if you put too much on and a glob might get on something. Also, even though it is non toxic, I wouldn’t want Chester and Gretel eating a big blob.

My advice is to put in on sparingly – only enough to thoroughly coat the area.

One application is supposed to last about a week so you don’t go through it fast. My little container is getting low though so I will be in need of more soon.

Where Can I Get Musher’s Secret?

I first tried to buy Musher’s Secret at a pet store in 2011. It proved near impossible to find it in pet stores in Seattle.

According to their dealer listing, the closest place to me that sold it was 15 miles away so I ordered it online.

Since then, I’ve seen it in a lot of pet stores around the country. However, I’ve only seen it in specialty boutique-type pet stores.

If you don’t have a pet specialty store by you, or they don’t carry it, the easiest thing to do is order it online (affiliate link).

To be honest, I am not sure I have noticed a difference with it on. I mean, Chester and Gretel haven’t had any foot issues on the ice and snow so it must be working? They didn’t have problems before using the was either but I admit we didn’t get out as much in the winter as we do now.

According to the testimonials on the Musher’s Secret website, it has worked miracles for some dogs. Also, Martha Stewart mentioned it in her winter pet tips article and it generally gets a 4-5 star review on Amazon.

We are definitely going to continue using Musher’s Secret. I believe in doing everything you can to stack the cards in your favor and I trust, even though I can’t see it, that it does all of those wonderful things I read about.

I expect we will continue our streak of no foot problems with the help of Musher’s Secret.