It appears that my Dachshunds aren’t the only ones that love to hike.

I was on a Doxie forum at www.hotdogblog.com and asked the group of anyone else hiked with their wiener dog.

I received a response from a woman who said her dog Sadie had been hiking ever since she was a puppy and that was all she knew. 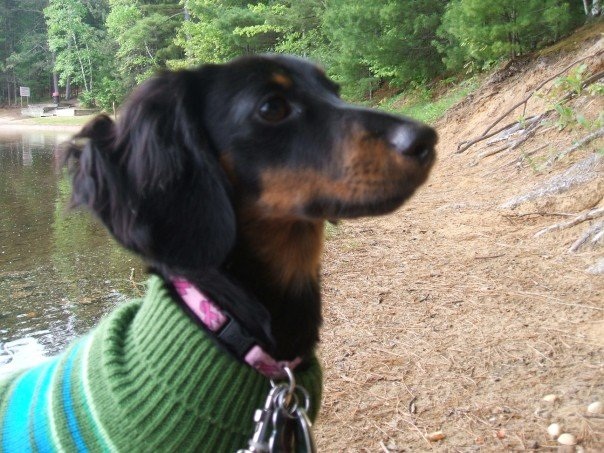 I thought “Virginia, is that you?” because the story sounded just like the story of Sadie, our first featured Adventurewiener from Port Townsend (and her mom is Virginia….hence the question).

It turns out they were not the same Sadie but the love of hiking and adventure WAS the same.

This Sadie, our second guest Adventurewiener, lives in Ontario, Canada.

Sadie’s owner got her as a puppy when  she was finishing up college. She hoped that Sadie could “rough it” and live up to the adventurous lifestyle that her and her roommates were used to.

Sadie’s first adventure was a grand one.

When her family was looking for a place to take her, they searched for somewhere with a lot to do, some sort of historical significance, within a days drive, and with the least likelihood of running into bears.

They drove to the park, camped and hit the trails the first thing in the morning.

Not knowing how Sadie would do, they decided to start off with and easy hike and chose the High Pines Trail – a moderately rated trail through the woods and along a few of the smaller ponds in the park.

Sadie handled it like a pro and they made it back to the campsite around noon for lunch.

After lunch they headed to the Abes and Essens Lake Trail, which is divided into four loops. It was a much more strenuous hike but they managed to do three miles before the sun started setting and they were forced to head back.

All in all, their first day went well and Sadie easily kept up for the five total miles they had hiked.

They spent the next few days swimming, canoeing (yes, Sadie also loves to canoe) and hiking around the park.

While they were hiking the Sheild Trail, Sadie’s mom got sick of her constantly pulling and tugging on the leash so she took a chance and let Sadie go on her own. Sadie listened beautifully and she never hiked more than five feet ahead of them.

Sadie probably doubled her miles by running back and forth up the trail and hopping over large rocks and downed trees on the trail.

She was so tired that at dinner time she barely lifted her head when a chipmunk came up to her bowl and stole some food (and being a Doxie she must have been real tired if the was still food left in her bowl!).

By the time they left for home they had hiked every trail in the park and covered about 15 miles.

If you are wondering if that was too many miles for her, check out my article about how far a small dog can safely hike.

Needless to say, they were very proud of their little girl Sadie and her amazing Stamina.

That was just the start of her adventurous life.

Do you have a Dachshund that likes to hike?