Top
You are here: Home / Other Dog Friendly Activities / Bike Tour with the Dogs – Astoria to Cannon Beach, Oregon

A couple of weeks ago we took the dogs on a cycling tour of the North Oregon Coast from Astoria to dog friendly Cannon Beach. The whole route was about 60 miles.

It was only the second time they had ridden in their doggie trailers. It was also our first time on a bona fide bike tour.

The trip was not short on adventure.

We got up Monday, loaded up the bikes, trailers and gear, and made the 4-hour drive from Seattle to Astoria, Oregon.

After the uneventful and somewhat boring drive to Astoria we checked into our hotel, found a doggie-friendly place to eat, and wandered town checking out the sights.

The next morning we repacked our panniers, dropped our car off in the free-parking lot at the visitors center, and set up the bikes and trailers for the ride. Seeing as how I had never ridden a bike with loaded panniers, let alone pulled a doggie trailer, I took a quick spin around the parking lot to test it out. To my surprise, it was pretty easy after the wobbly start.

Our first challenge, or adventure, of the trip started immediately after.

When we left the visitor center parking lot we had to get to the other side of a very busy road to reach the waterfront trail that would take us to the other end of town. The nearest light was at least a half mile in either direction and the sidewalks were under partial construction.

With all that traffic and the narrow lanes we didn’t dare ride on the road. We ended up waiting and then running our bikes across the road trying not to get hit by cars.

Riding along the waterfront path instead of the street was very nice but it was a little sketchy when we had to ride over a bridge shared with the trolley. There was only room for two bikes OR a trolley so luckily the trolley hadn’t made it to the bridge yet…although we could see it about a half mile off in the distance.

Riding on the bridge was a little scary for me because you had to cross train tracks (which are a nightmare in a bikers eyes and resulted in a pretty good crash the last time I tried it) and then ride over a wooden surface with parallel grooves in it. My tire kept getting caught in the grooves which pulled my bike all over the place.

I would have walked but we had to beat the trolley.

To get out of Astoria we had to cross a bridge. There are two different bridges you can use to go south.

Choosing this way did take us a bit out of the way but was way less scary for me.

When crossing the bridge, we still had to literally ride in the road because the elevated shoulder was too narrow for the bike trailers. To me it was just too narrow for bikes period.

Riding in the traffic lane wasn’t the scary part really. It was when we had to ride across the grated deck and my bike was wobbling all over the place. I think my knuckles turned white. 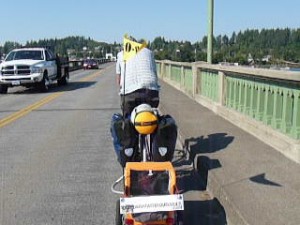 You can watch a video of us in action here.

We weren’t on the bike 10 minutes and Chester became restless, whining and chirping the whole way down the street. That only lasted about 20 minutes though and then started to settle down.

I don’t blame him for being a little anxious because he was not used to the trailer and cars were zooming past him only a couple of feet away. If we had done this the “right” way, we would have spent some time riding in traffic around home to get him used to it.

Once we got off the back roads onto Highway 101, the zooming cars and big trucks started.

The ride was without real incident but we did end up on the wrong side of the highway once and had to run across the lanes with our bikes.

We did find a roadside espresso stand with good smoothies and a porta-potty for a rest stop along the way.

Once we were off the bikes in Seaside, things went pretty smoothly.

We checked in with our host for the night from WarmShowers.org and he told us to make ourselves at home in this place.

We spent the night going out to dinner, walking the beautiful beach, taking photos and chatting it up with our host.

In the morning we went to breakfast at this little Seaside restaurant we had seen the day before (which had an amazing breakfast by the way), bought a gift to leave our host (Beer and TP), packed up and hit the road again for Cannon Beach. Unlike the fairly flat ride from Astoria to Seaside, this stretch of highway between Seaside and Cannon Beach WAS NOT flat.

The ride certainly wasn’t as pleasant. We had to go over a really big hill that put a lot of torque on my knees and almost the entire shoulder was covered with big rocks and broken glass.

We couldn’t exactly ride over the white line on the highway so that meant we had to bump the dogs along the side of the road and cross our fingers for no flat tires. At one point Gretel’s trailer almost flipped over (watch the video here).

Just when I started to wonder how all of the rocks got on the side of the road a big semi truck blasted past us, spraying us with golf ball size rocks. Seriously, I thought I was in danger of getting a black eye from one of them.

We did make it into Cannon Beach without real incident and, after getting turned around, found our campsite.

The campground was very pleasant for what it was – a front-country campsite geared toward car campers. That meant warm showers and easy access to campfire wood but not much privacy.

This time of year there were a couple of sites still available so we were able to check into tone for both of the nights we planned to stay.

After setting up camp we walked into town. We had a pleasant time eating dinner, wandering the beach and taking photos.

That night though we didn’t get much sleep.

As quaint and wooded as our campground appeared, it was sitting right next to the highway. Apparently, night time is when semi-truck drivers like to do a lot of driving and there is no jake-brake law through Cannon Beach.

At one point it sounded like a truck was dragging a chain that was beating repeatedly against the side of the truck.

We woke up too late for breakfast the next morning. We rode our bikes into town to get coffee and something to eat before exploring the area.

Only one place in town served breakfast late but dogs weren’t allowed there. I love my breakfast so I was a little disgruntled I had to settle for lunch for breakfast…..and coffee.

After eating, we rode our bikes up the windy road into Ecola State Park where part of The Goonies movie was filmed.

The up-side was that the road wan’t nearly as long as I thought it was going to be. The down side is that it was terribly steep.

So there I was grinding away at the gears, grinding my knees, and sweating profusely up a couple of miles of road with absolutely NO shoulder. Did I mention that the dogs were whining and barking again so in between breaths I had to yell at them almost the whole way up?

The park was beautiful and we decided to go on, what I thought would be, a nice 4-mile hike along the beach.

Well, it wasn’t that at all. It turned out to be a hike through the woods where you could barely even see the water.

The hike had some flat stretches but it was mostly UP and then DOWN which wasn’t pleasant for me and my already sore knees. We did get to walk on a short stretch of beach at the end but then it was back UP and then DOWN back to our bikes.

The next day we tackled the entire 30-mile ride back to Astoria.

We had looked at a map to find an alternate route. We decided to leave the highway at Seaside in lieu of back roads where there would be less traffic and we could go over the older, smaller bridge again.

I assumed the road would be flat like the ride down to Seaside was but boy was I mistaken.

It was very hilly. The plus side was that the hills were a struggle but not “oh my god” unmanageable. My already sore knees took quite a beating though…and it was HOT. The dogs were being restless and grumpy again too.

The ride back took us about 4.5 hours.

So, Where Was the Fun in All of That?

You might wonder how I found all of our trials and tribulations fun.

Well, I love adventure, pushing myself, and enduring a little discomfort in the name of a good story.

We got a lot of fresh air, exercise, got to take life at a slower pace, and learned how to manage the dogs in the trailer so they complain less.

We ate good food, took in beautiful sights and got to walk on miles of beautiful, sandy beaches.

We met some great people along the way and came back with awesome stories.

We get to say we did something a lot of people don’t do – pull our dogs by bike for 60 miles along the Oregon Coast.

The truth is, I had a lot of fun on this trip.

Overall, I thought the dogs did great. Out of the approximately 12 hours we spent on a bike during this trip the dogs made noise (mostly whimpering but some barking) a total of maybe 2 hours of it.

Someday we might try bringing the dogs on a bike trip again.