Top
You are here: Home / Dachshund Facts / What Is a Toy Dachshund? 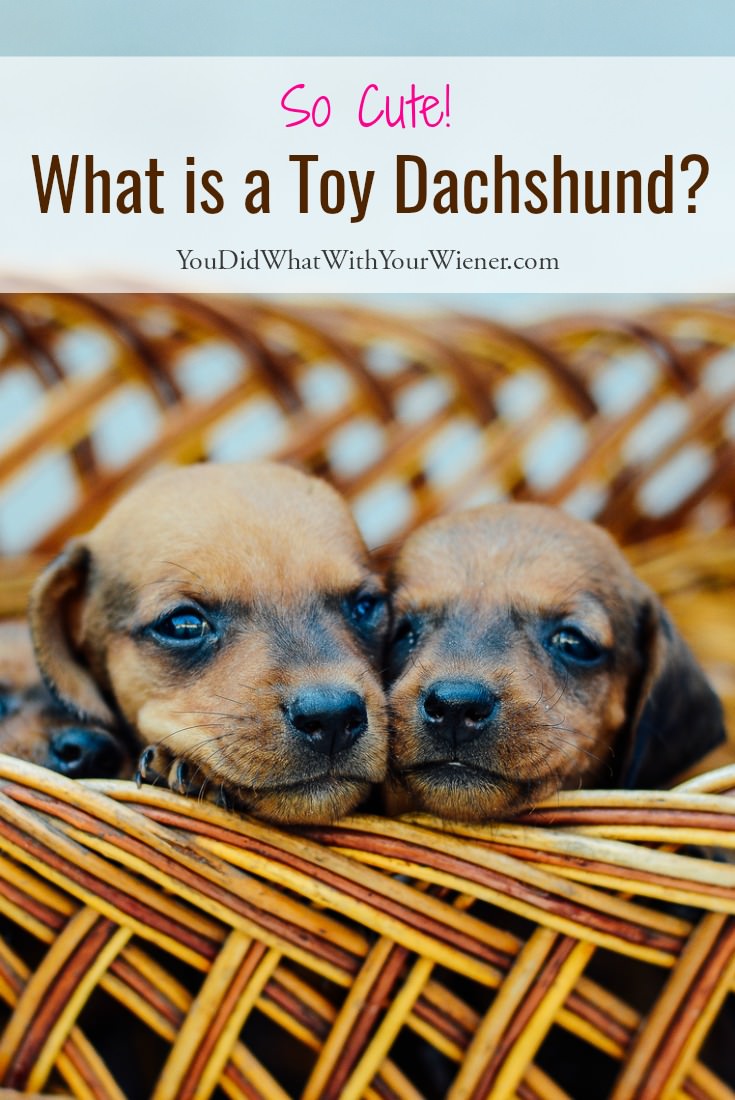 I heard of this thing called a “toy” Dachshund last week. I admit I was a bit taken aback by this categorization but, ultimately, dismissed it. However, a reader left a comment to one of my articles the other day and said she wants her next Dachshund to be a “Toy”. What is a toy Dachshund?? It seemed like this term was spreading like wildfire so I wanted to get to the bottom of it.

I’ve been studying Dachshunds for over 10 years. First as a interested pet parent that wanted to know everything about the dog I had (I knew nothing about Dachshunds when I inherited Chester). Second, as a blogger. I’ve been blogging about Dachshunds, and running a 500-member Dachshund club, for 6 of those years. Last week was the first time I had ever heard of a “toy Dachshund”.

SPOILER ALERT: NO, A “TOY” DACHSHUND IS NOT A REAL THING AND YOU SHOULD NOT PAY A LOT OF MONEY FOR ONE. KEEP READING TO FIND OUT MORE.

First, What is a Rabbit Dachshund?

According to the World Canine Federation (WCF), “While the 83 countries of the World Canine Federation separate Dachshunds into three classes (standard, miniature and kaninchen), the kaninchen is not recognized by the American Kennel Club or clubs in the United Kingdom. Clubs in these countries only recognize the larger standard Dachshund, which it defines as dogs weighing between 16 and 32 lbs, and the miniature Dachshund, which is defined as a Dachshund weighing less than 11 lbs.”

“In Germany the Dachshund is divided into three categories based on the size of the hole it can enter (they were bred for hunting). The first category is the standard Dachshund; while the second and third consist of the miniature Dachshund which is further split into two categories.” (EasyPetMD)

Historically, the standard, miniature and rabbit (in most countries) are the three sizes of Dachshunds that exist. 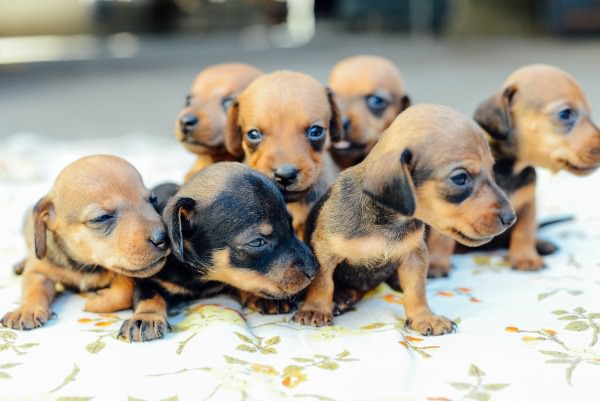 Is the Toy Dachshund a New Size?

According to the Wikipedia page on toy dogs, “Dogs referred to as toy, or teacup, dogs are found in the Toy Group of breed registries.” However,, “No major or reputable dog registry recognizes the term “teacup” dog, thus the toy/teacup boundary remains fuzzy. The standard size for a toy dog ranges from 4 to 7 pounds; anything smaller than the standard size of a toy dog may be a runt of a litter… There are no specific teacup dog breeds, but popular types for breeding teacup dogs include: Shih Tzu, Chihuahua, Yorkshire Terrier, Poodle, Pug, Maltese, Pomeranian, and Silky Terrier, among others.”

I was curious about the term “major or reputable dog registry”. Since Wikipedia can be edited by common people like myself. “reputable” may be subjective. The largest and “most reputable” registry that comes to my mind in the United States is the American Kennel Club (AKC). I checked their website and “toy Dachshund” is not not listed on their page of AKC recognized toy breeds.

The other US registry that comes to mind is the United Kennel Club (UKC). They only recognize two sizes of Dachshunds – the miniature at 11 lbs. and under and the standard at 11 to 25 lbs. (note that the AKC recognizes the Standard to be 16-32 lbs).

The United Canine Association (UCA) was the only registry in the world I could find that recognizes a “toy” subcategory of Dachshund. The UCA is an “elite all-breed dog registry” willing to register breeds, and dogs with certain physical characteristics, that are not recognized by the traditional breed registries. The UCA recognizes three sizes of Dachshunds – toy, miniature, and standard. They say the miniature Dachshund is 8-11 lbs and the toy is 3 lbs or less. (More about this organization in the next section) 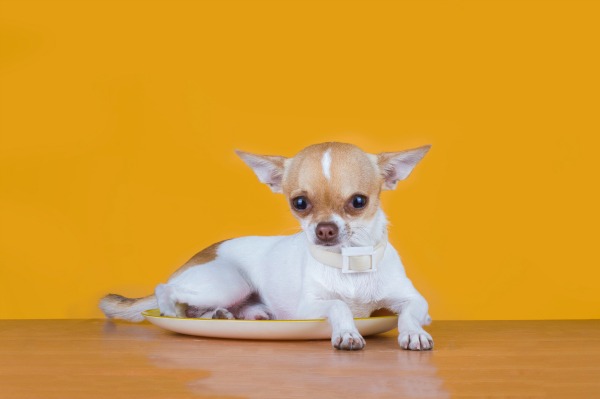 What is a Toy Dog?

Note: many people are skeptical of “designer dogs” but, as the Designer Breed Registry urges, “We must remember that at one time all of todays recognized/established breeds in other registries were once a breeder’s vision… A designer dog”. While I admit I am skeptical myself, there is some truth to that.

None of the major and longstanding breed registries recognize the “toy Dachshund” but the United Canine Association (UCA) does. So who is the UCA? I had never heard of them before so I did a little research. I will admit I was skeptical of them and it’s possible to find information to support any belief. Being skeptical of new things is human nature so I tried to keep an open mind. There was limited information to be found about them beyond their “yay us” website, but this is what I was able to dig up.

From Yahoo Answers (Source) (not a very reliable source but I didn’t have much to go on here):

A1: “No, it is not. The allow dogs that are on AKC LIMITED registration to be registered, and also promote colors of different breeds which would be disqualifying colors by AKC standards.” (bottom line: they register dogs that don’t meet AKC standards)

A2: “It seems like the perfect place for new breeds and their breeders to go. It’s also an option for those sick of AKC type registries and their pompous rules and judge – mental nonsense.” (bottom line: The AKC has certain standards and rules. If a breed, or dog, doesn’t fit those standards, they won’t register them. However, there are other registries that might.)

The Designer Breed Registry (DBS) list includes the UCA on it’s list of approved registries. The Registry was established in central New Jersey in 1979 by a small group of dedicated breeders who had an interest in exploring the possibilities of creating new and exciting breeds of dogs. I could not find when the UCA was established (the fact that they don’t say on their website is a red flag to me) but it seems that is a relatively new organization.

I asked breeder friend of mine about them and if they were a reputable organization. She said she had never heard of them so that indicates they are new. She also said, in her opinion, “definitely NO on that one if they are registering ‘designer breeds'”. 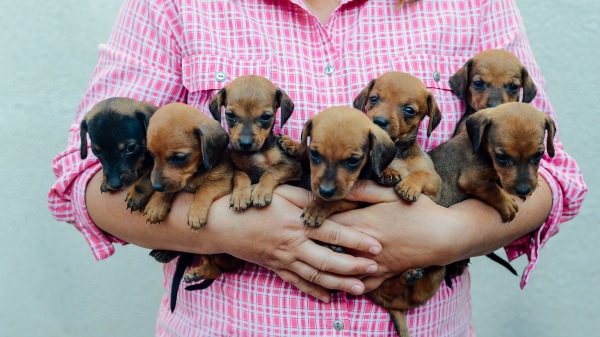 My Conclusion About the Trend of Toy Dachshund

The reality is, a Dachshund is a Dachshund and they come in all sizes. Some are large, some are small, and some are very small. How much they weigh determines what breed category they fit into with breed registrars.

The World Canine Federation recognizes a “rabbit” Dachshund but not a “toy” Dachshund. However, the standard for both seem to be under 8 lbs. While the rabbit also has a breed standard for chest circumference, the toy does not. However, due to the sheer “smallness” of a toy Dachshund, the chest probably meets the size requirement for the rabbit in most cases. In my opinion, the toy Dachshund is just the rabbit Dachshund with a different name.

Tiny dogs are super cute. So what’s in a name? A lot actually. The name matters both in public perception and the amount of money breeders ask for a dog.

First, consider the size. The smallest puppies in a litter used to be called runts. Runts are cute. Breeders realized that and started breeding runts together to ensure that most pups in the litter were also runts. They decided to call this “runt” dog a “toy” dog. It used to be that breeders practically gave the runts away but now they are a “legitimate” classification so they can charge the same price for them, and often a lot more, than miniature Dachshunds.

Second, consider the “non-show quality” dog. Historically, every breeder assesses a litter and determines, based on breed standards, which dogs are “show quality” and which ones are “pet quality”. The show quality dogs are usually sold for much more money than the pet quality. In the case of toy dogs, many breeders will charge as much or more for this “pet quality” dog that is a “designer breed”. It just seems like a money-making scam to me (if you breed these dogs, feel free present a different side to this in the comments).

In my opinion, you should not pay more for one. You should be doing a lot of research, and asking a lot of questions, if you plan to buy a dog from a breeder. During your research, discuss how small a breeder’s dogs usually are when full grown. Choose a breeder who is able to consistently produce small miniature Dachshunds and ask for the smallest one in the litter.

Also be aware that dogs bred to be “teacups” often have many health problems associated with them. A common ailment of Dachshund – a degenerative back disease called Intervertebral Disk Disease (IVDD) – is linked to the dwarfism gene. I am going to assume that the smaller (more dwarfed) Dachshunds may be more prone to this disease. That is just my speculation though – it may not be fact (my research says that the incidence of IVDD is not significant between the standard and miniature size so…). Just be sure to ask the breeder about this health issue if you plan to purchase a toy Dachshund.

Wanting a “toy Dachshund” is not wrong or silly. However, I want you to be informed before you purchase one. They are nothing more than a very small Dachshund.