I read a lot of trip reports about the Dog Mountain hike north of Portland, Or (east of Vancouver, WA). I read about it being dog friendly, the amazing yellow wildflowers in spring, and the spectacular views of the Columbia River.

Since we aren’t used to hiking with those risks, I kind of felt like we were hiking into a war zone. 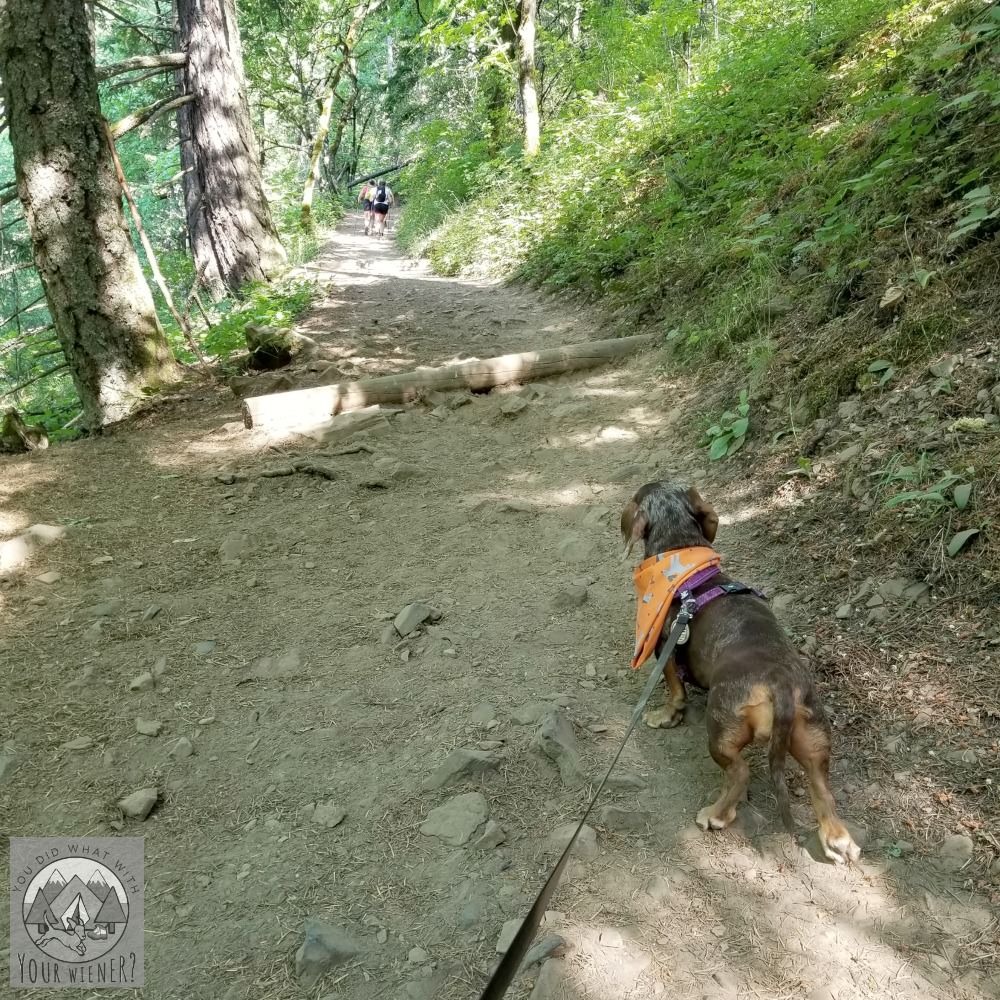 The reports weren’t wrong about the trail being a butt-kicker. It started to climb right away.

It was a good reminder to tighten up my core and push off by squeezing my glute muscles rather than pushing off with my toes. My calves were still burning for the first 15 minutes though.

The first part of the Dog Mountain trail to the junction was through the woods. It was a warm day so the cool, moist, shaded trail made it more pleasant.

At the first junction, Gretel and I took the “more difficult” route because we like a challenge.

We’d passed a group of 20 hikers waiting at the bathroom when we started the hike, and saw probably another dozen people head up before and after us, but we only saw one other person coming down on the more difficult route though.

I did see poison oak but we stayed on the trail. Well, I know it’s there and I think I saw it. I saw a few plants that could be poison oak (I’ve never seen it before that I know of) but I’m still not totally sure.

To try and avoid the issue of poison oak and ticks altogether, kept Gretel on a short leash and made sure she didn’t wander off the established trail.

We opted not to stop at the bench where the two routes meet up again but it would make for a nice rest spot.

Shortly, we came out of the trees and saw our first yellow wildflowers – Arrowleaf balsamroot. 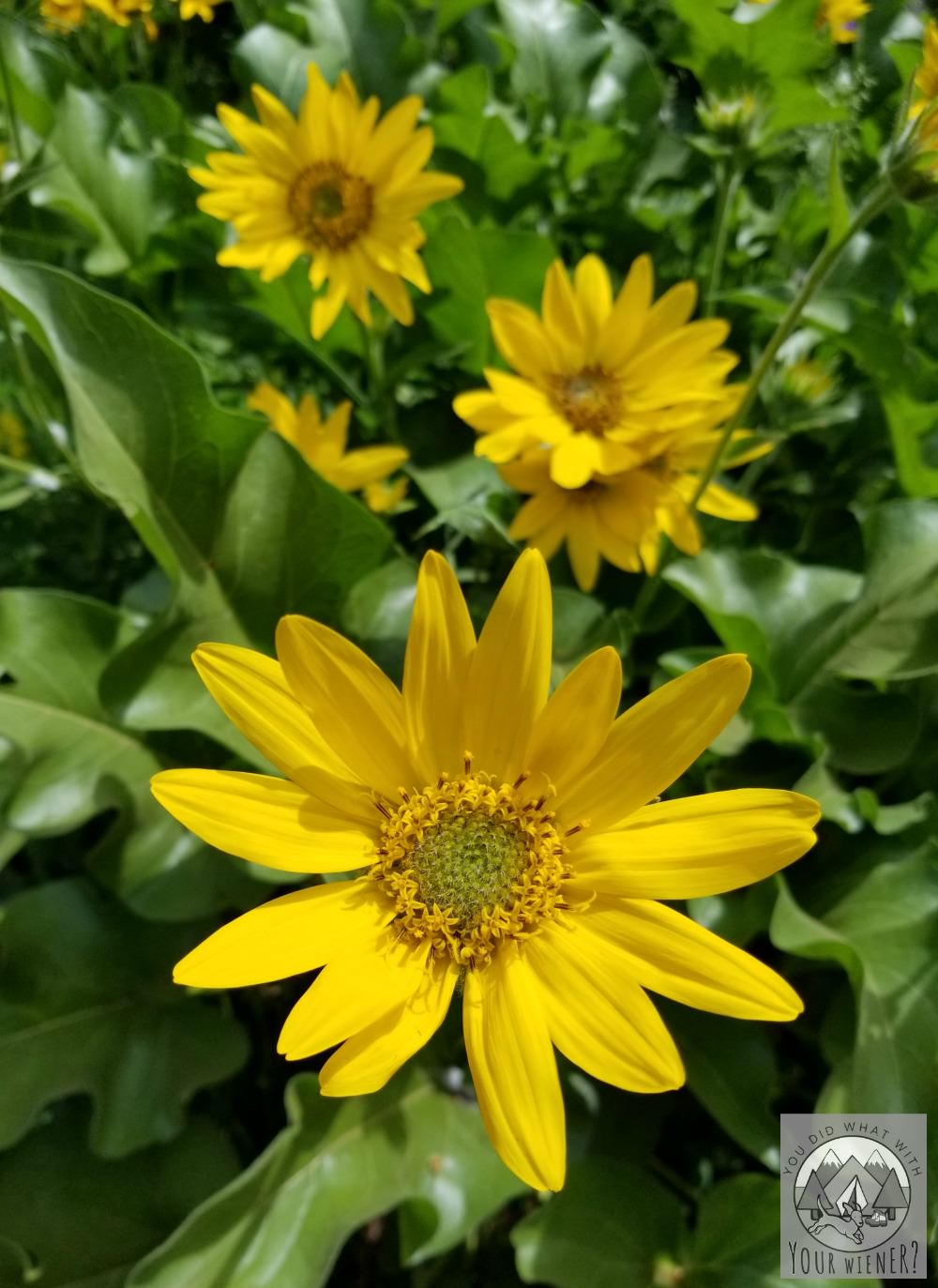 The hillside was open and exposed. This meant there was no shade and the sun was getting hot by then.

Luckily, I had put on plenty of sunscreen.

It was pretty windy, which made the sun more bearable. The stiff breeze kept the flies and bugs I’d heard about away.

The rest of the climb to the lookout with views of the Columbia Gorge was pretty crowded. We had to navigate several dogs off leash and found ourselves hiking in a line of 5-10 people often.

It was clear that some people were annoyed with the long line of people and in a hurry.

I was patiently hiking behind a lady slower than me on a steep, narrower section of trail – and trying to keep Gretel off her heels – when a lady came up quickly behind us and yelled “can we pass you thanks” as she pushed past before I even had the chance to step out of the way.

The lookout spot was interesting because it was large, on a hillside, and was kind of naturally tiered like seats. It felt like we were sitting down for an outdoor concert. 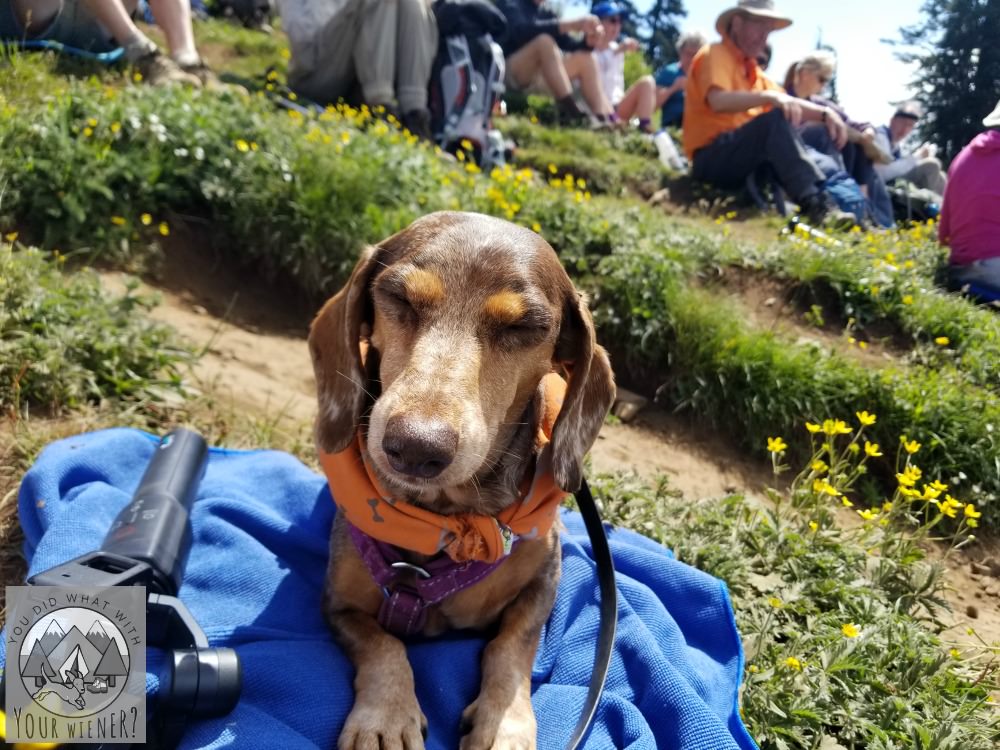 Gretel and I rested at the top and had snacks.

She laid quiet like a good girl even though there were other dogs around. A gentleman next to us commented how cute she was when she sat up for a treat.

On the way back down, I got turned around and almost took the wrong trail. I kept going straight instead of taking the trail to the right.

I didn’t remember turning a corner to get to the top and the trail to the right kind of doubled back. It looked like the wrong way. But shortly, the one I was on looked wrong.

It was narrower and a more overgrown than I remembered the trail up being. Also, I could see people coming up on a trail below me but it looked like a different one than we were on.

I went back to the junction and took that right instead. That was definitely the correct trail back to the parking lot the way we came.

I’m pretty sure the wrong turn I made put us on the Augspurger Mountain Trail, which also heads down to the parking lot. It’s a little longer but less steep.

The next time we go back, I’ll probably take that route down. From what I’ve read, it’s less crowded and has more views.

On the way down, we took the less difficult trail (left at the fork) instead of the one we came up.

It was also through the woods with no view, except for the hillside lookout part way down, which looked very similar to what we saw at the top.

I didn’t really feel like it was less steep than the “more difficult” trail. It certainly felt longer though. 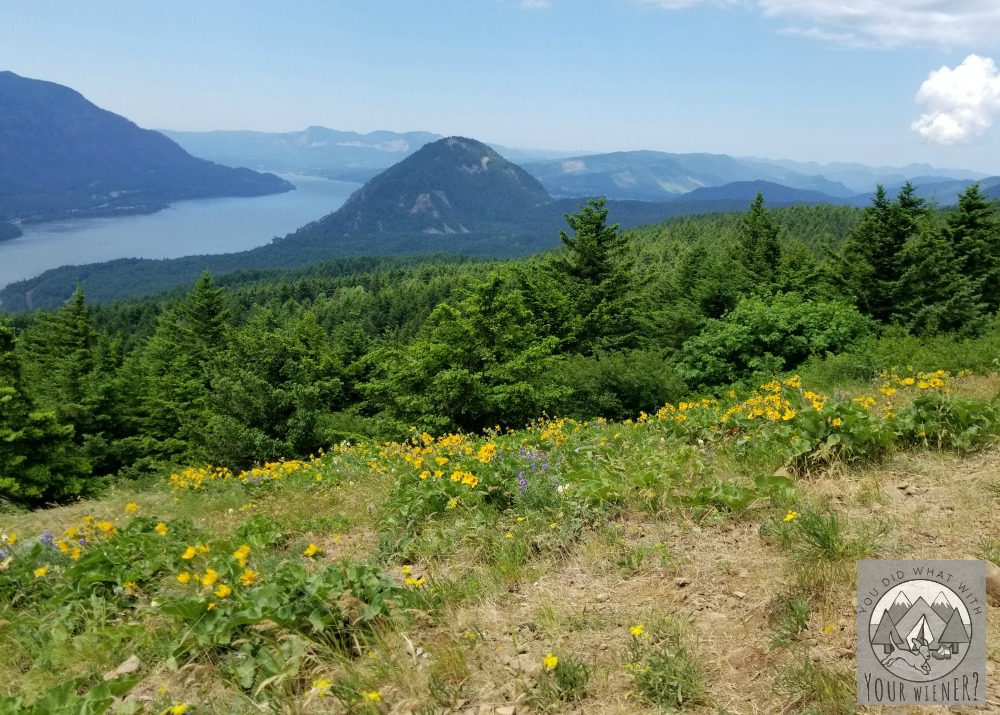 Lower Lookout on the Dog Mountain Trail along the less difficult route. This is a good turnaround spot for a 3-mile roundtrip hike.

I don’t know that I’d bother to go back when there aren’t wildflowers though.

I mean, the Columbia River Gorge is pretty and all but I grew up in the northwest so it’s not super impressive.

To me, it’s the hills covered in spring wildflowers that made this hike so beautiful.

The trail was crowded but not as crowded as some trails around Seattle. I went early on a weekday though.

I understand that it’s so crowded on spring and summer weekends that the Forest Service had to start issuing permits (see the trail stats section below) to limit the number of people on the trail.

The trail is wide enough in most places for people to pass, some spots more comfortably than others. This is helpful if you have a dog that needs a little space between themselves and strange dogs.

There are a few spots above treeline that are too narrow so you have to step aside (technically, the downhill person should yield to those coming uphill). The trail coming up felt wide like a Rail-to-Trail path though.

I was pleasantly surprised that 75% of the hike was in the woods – so it’s cooler and with shade – no matter which route you take.

The Dog Mountain trail is east of Vancouver, WA and east-northeast of Portland, OR.

It’s one of the most popular hikes in the Columbia Gorge, especially in spring when the hillsides are blanketed with yellow wildflowers.

Because of this, you’ll want to get to the trailhead parking lot early.

We got there around 8:30 am on a Wednesday and the parking lot was already half full. In the 15 minutes it took me to get ready, it was almost completely filled up.

Also because of this, a day-use permit is now needed to hike the trail on Saturdays & Sundays from April 20 through June 16 (when the wildflowers are at their peak and the trail is most popular).

You can purchase this permit online and drive to the trailhead (the permit only covers the number of people hiking – it doesn’t guarantee a spot to park) or park at the Skamania County Fairgrounds and take the shuttle (details below). The shuttle fee includes the permit.

The trail starts out steep and doesn’t let up much. The dog mountain hike elevation gain is approximately 930 feet per mile.

I say approximately because, although it mostly climbs, there are a (very) few flatter spots that allow you to catch your breath. However, these little breaks mean the incline is more than 930 feet per mile in other sections to make up for it.

The trail starts climbing out of the parking lot. A couple of hundred of feet up the trail is an outhouse with two bathrooms (the second one is around the back).

The trail climbs past the bathroom. At approximately the 1/2 mile mark, you come to a junction 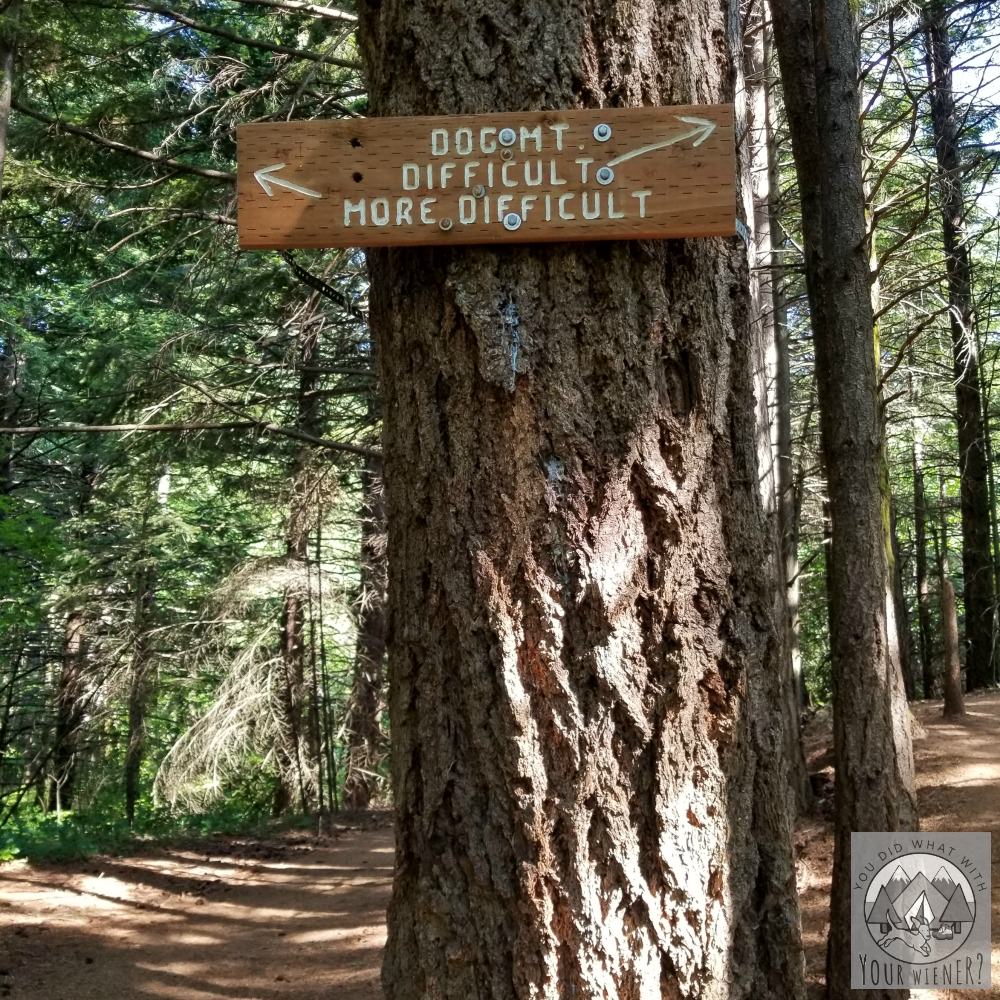 The more difficult trail to the left is usually less crowded and meanders through the cool forest to the junction where the two branches of the trail meet up.

The difficult trail is 1/2 mile longer but not quite as steep and has a lookout where you can sit and take in the view on the Columbia Gorge.

As the description implies, neither are easy.

Where the two trails meet up again, there is a bench to sit on.

Continuing up the trail, it climbs steadily. Soon you come out of the trees and the smooth-up-until-now trail becomes rocky.

Since you’re now on an exposed hillside, the sun can get hot and it’s often windy (which can feel great after that sweaty climb).

You probably won’t miss the spot that most people stop and turn around because, well, there will be a lot of people stopping there.

Honestly, it seemed pretty nondescript so I’m not sure I could describe it except it’s after the third junction (after the trail up splits and comes back together). But don’t worry, it’s very unlikely you’ll be alone up there and miss it.

After eating a snack and taking in the gorgeous view (including Mt. Adams on a good day), to return back to the car the same way you came, head back down the hill and take a right at the first trail junction.

You can also make this a loop hike by coming back down the Augspurger Mountain Trail #4407. It adds a mile to the hike but it’s not as steep and you’ll get more views of the Columbia River. 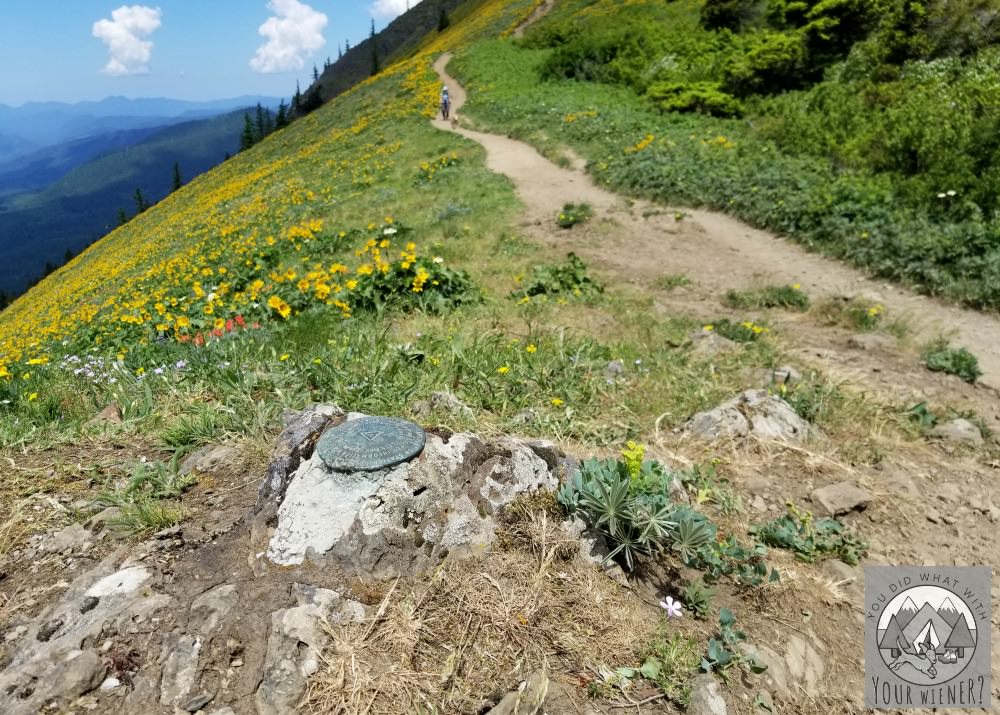 Distance: 6.0 miles to the lookout roundtrip

Permits and Passes: Northwest Forest Pass. On weekends, and additional day-use permit is needed per person (to carry with you on the trail). This additional permit is $1.50 if purchased online or free if you pay $2 to take the shuttle from the Skamania County Fairgrounds (the shuttle is dog friendly).

Directions:  Take I-5 north or south, depending on where you are coming from (or, alternately I-5 to I-205 north/south) and exit for State Route 14. Drive east to Carson, WA. Continue driving east approximately 9 miles to the trail-head, just beyond milepost 53. The parking area and trailhead are on the north side of the highway (opposite the Columbia River). This parking lot can fill up fast but please note that parking along SR-14 near the Dog Mountain Trailhead is prohibited. 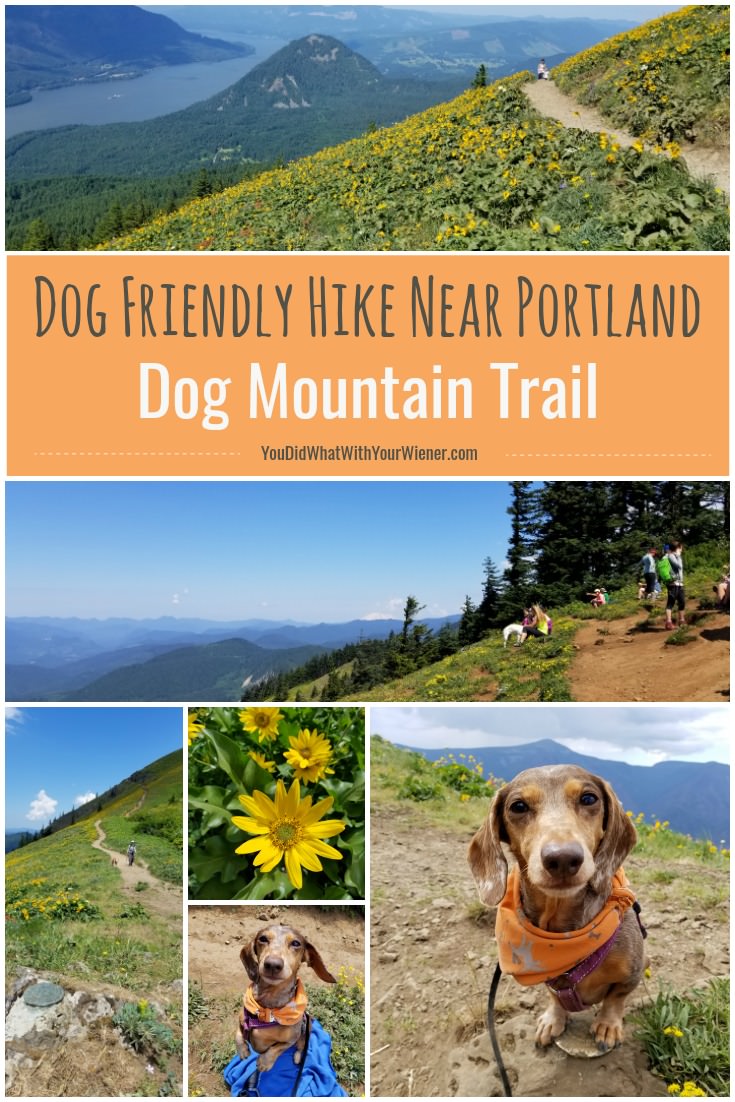