Top
You are here: Home / Dachshund Facts / WEIner vs. WIEner and Other Nicknames for a Dachshund

Once upon a time, a girl (me) inherited a little funny shaped dog from a roommate. I decided I should learn all I could about the Dachshund breed and that started my obsession.

Since that day, I’ve learned that people also call Dachshund by alternate names including wiener dog, weiner dog (a misspelling of the word very common in the Dachshund community), dotson dog, doxin dogs, doxie, daschie and oh, so many more.

All of these different names are for the same breed of dog.

For example, when someone asks, “Where can I find a Dotson dog?” they really mean a Dachshund. They just don’t know the real name for the dog or how to spell it.

Dachshunds and Wiener Dogs are the same thing too.

Where Did the Dachshund Name Come From?

The Dachshund is a member of the hound group that originated in Germany for hunting.

They were bred to hunt badgers, and other burrowing animals, in the woods.

The word Dachshund is actually made up of two German words: Dachs, which means badger, and hund, which means.

How do you spell badger dog?

Well, the secret is out. The way I have spelled Dachshund in this article is the proper way.

To be crystal-clear, the proper spelling of the breed is D-A-C-H-S-H-U-N-D.

How do you pronounce Dachshund?

In German, the word “hund” is pronounced HUUNT.

The Most Common Nickname for the Dachshund

The most common nickname for the Dachshund is Wiener Dog.

There are various stories of how Dachshunds got this nickname but all involve the selling of sausages in Vienna (Wien), Austria (source).

Note: wiener dog was eventually called the hot dog and then that term also became interchangeable with Dachshund dogs.

WIEner Dog vs WEIner Dog – Which is the Correct Spelling?

The proper German spelling of the word is “WIEner”. However, Dachshund lovers spell it both ways.

It’s misspelled so often that it doesn’t seem to make a difference how you spell it when referring to the Dachshund dog – people, and Google, know what you’re talking about either way.

If you don’t believe me, type the misspelled version into Google and you will find that plenty of web pages about Dachshunds come up.

One night 10 years ago, I decided to start a blog about my Dachshunds.

I knew that Dachshunds were also called Wiener Dogs. I liked that nickname better because it fit our silly and free lifestyle.

Why Did I Use the Improper Spelling for the URL of this Blog?

If you didn’t notice, the URL of this blog uses the improper spelling “Weiner”.

I know some of you notice because the grammar police remind me a few times a year that I’m an idiot and and not using the proper spelling of the word.

When I started this blog, I admit I didn’t remember how to spell the word. So I did what everyone does and Googled it.

Since I was looking for how to spell the word when referring to Dachshunds, and given what I said above about the two different versions, both spellings came up an equal amount.

I hopped online, typed “WEIner Dog” and Google returned a lot of results about Dachshunds and the nickname with that spelling.

I then typed in a different spelling – “WIEner Dog”. Just as many relevant results were returned.

I chose the latter spelling.

Apparently, I chose unwisely because as this blog became more popular and I started doing interviews, I was often asked why I misspelled “wiener”.

I wanted to have a clever reason but I didn’t. My spelling of the word was a split-second decision while I was tired based on what I found on the internet.

I did eventually change the spelling of the blog to WIEner so it was proper and so I would stop getting questions.

So, technically, I do care.

I care that I spell it right as an example to others and I care because I’m really tired of being talked to like I’m an idiot.

However, I was unable to change the spelling of the word in the URL of this blog.

I was also not able to change the spelling on our Facebook page.

Why I couldn’t is too long to explain here so let’s just leave it at that.

Now, when people point out my mistake in spelling, I no longer care. 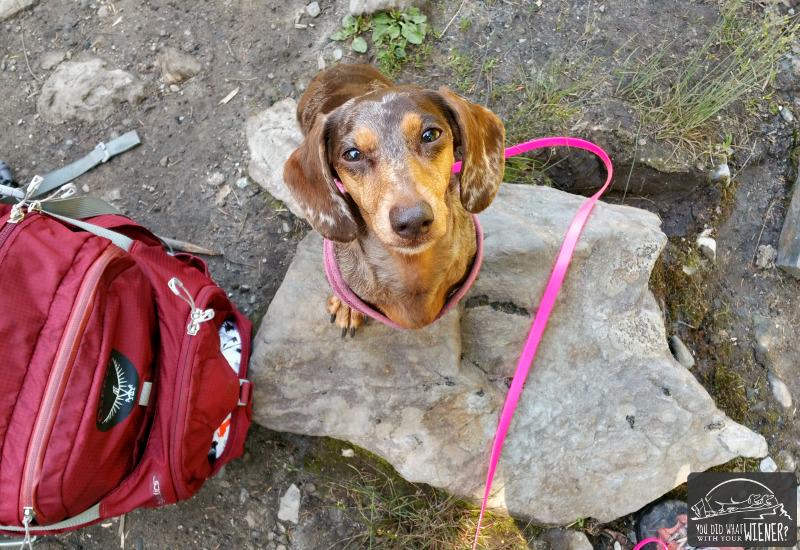 Other Nicknames for a Dachshund Dog

I’ve been blogging about Dachshunds, and running Dachshund club in Seattle, for over 7 years.

I think I’ve heard every name there is for a Dachshund and so many variations on those names.

Although Dachshund is a German word, in modern German they are more commonly known by the short name Dackel or, less commonly, by Teckel (source).

Nicknames for the Dachshund Dog

Other names I’ve heard a Dachshund called, and their variations, are:

More About The Dachshund Dog

To learn more about the Dachshund temperament and personality, read my articles:

There are 3 coat types – smooth (short haired), long haired, and wire haired. Each coat type comes in many color variations.

The breed is prone to health conditions like Intervertebral Disk Disease (IVDD), a genetic disease which affects their spine. This is the biggie – about 20–25% of Dachshunds will develop back problems in their lifetime due to IVDD.

The breed is also prone to seizures, cushings disease, patellar luxation, and allergies.