Top
You are here: Home / Dachshund Health / How to Survive With a Dog on Crate Rest

If your dog suffers from an injury to a joint or ligament, they will most likely be prescribed crate rest during the recovery process.

Crate rest is THE #1 thing you need to do if your Dachshund is suddenly paralyzed or suffers a spinal injury related to Intervertebral Disk Disease (IVDD). (Hover Over This Image to Pin)

Our Experience with IVDD Crate Rest

My Dachshund Gretel was diagnosed with IVDD in March of 2016.

Except for the controlled activities prescribed by the rehab vet, she needed to be confined to a dog crate for 8 weeks to keep her immobile.

Going into this, I knew a lot about treatment for IVDD because of the stories and experiences of people in the 500+ member Dachshund club I organize.

I knew that one of the biggest mistakes people make in treating their IVDD dog is letting their dog out of the crate early.

People usually let their dog out of the crate before the recommended rest period is over because it looks like their dog is feeling better, they feel bad, or the dog starts “complaining”.

The other problem with crate rest and potential re-injury is that a lot of Dachshunds are not crate trained. The IVDD treatment period is the first time they’re ever been confined to one.

This can result in a dog working themselves into a panic, crying, or thrashing around.

Not to totally scare you but it’s a cold, hard fact that failing to complete the recommended crate rest for your dog, or failing to keep them calm while they are restrained, can lead to improper healing and a greater chance of re-injury, full paralysis, or so much pain and degeneration that a “tough decision” has to be made.

I was NOT going to let that happen to us. I was dedicated to crate rest.

Even the Easy Days are Hard

Luckily, Gretel was generally good about being n the crate.

She was already used to spending time in the crate when we’re gone but she didn’t make any big fusses about it even though we were still home where she could see us.

I thought my dedication, and her relative ease with it, was going to make the crate rest period a breeze. Nope.

I needed to find a whole new daily routine.

The first week of us carrying her outside to go potty, giving her water in her crate, feeding her in her crate, figuring out how she could maintain her daily routine as much as possible from behind bars, and coordinating her care with my hubby was a challenge.

She did start to get fussy too.

She rarely whined in the crate but her increasing energy level made things harder and harder. When we walked around the house she started sitting up or rustling around in her crate to make sure we noticed her.

She tried to run out the door when I opened the crate unless food was going inside with her.

After about a week or so, we settled into a new routine that worked for us and felt as natural as her old one. But then there were more challenges.

I wanted to share what I learned in hopes of helping others through crate rest with their dog. 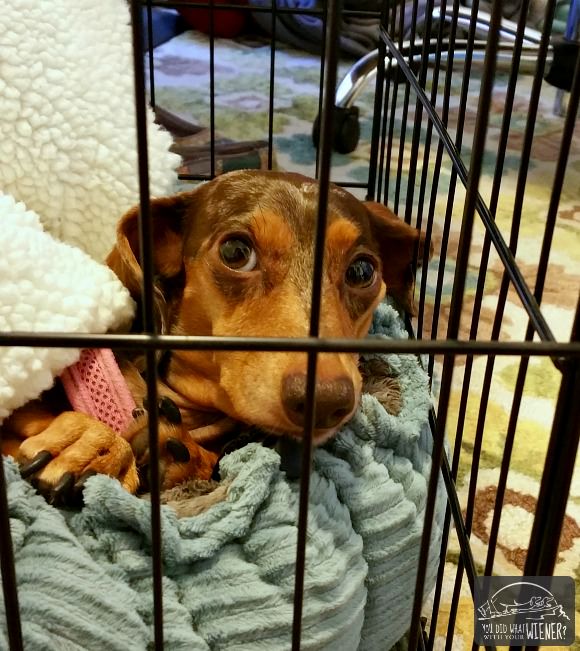 Tips for Surviving a Period of Crate Rest With Your Dog

Note: some of the links below are affiliate links. I’ll get a few pennies, at no additional cost to you, if you order anything… so you are helping keep this blog going. Thanks!

Your dog might be prescribed crate rest by a veterinarian for several reasons.

The three most common reasons I see are because of ACL tears or surgery, back surgery, or as conservative treatment for IVDD.

In our case, it was Gretel’s back issue that landed her in the clink.

Regardless of the reason, the following advice will help both you and your dog make it through any bout of cage rest!

Make sure your dog is crate trained early on

This is pretty much the #1 tool for surviving a period of crate rest.

If your dog is not at least used to being in a crate some of the time, keeping your dog confined to a crate will be miserable for both of you, if not impossible.

Give Your Dog Something to Help Keep Them Calm

During the first week of recovery, the pain and steroid medication kept Gretel sleepy and settled. Then she started to get restless.

My vet and I agreed to avoid sedatives if we could. Gretel is a high energy girl though so I needed to give her something to calm her down though.

I tried a few different natural remedies but settled on Vetriscience Composure for her nerves (although I had to give her enough for a 30-lb dog twice a day), Hemp CBD Oil, and Melatonin to make her a tad sleepy.

Some people have tried calming herbal sprays, phermone diffusers, or other “relaxing” herbal remedies with some success. Those didn’t do anything for Gretel.

Someone suggested giving her chamomile tea but I never tried it.

If natural remedies don’t work, I highly suggest asking your vet for a medication that will keep your dog calm and still.

I normally don’t recommend “drugging” a dog for no reason but crate rest is definitely a time when one must do everything they can to make sure their dog recovers.

The crate rest period might not be a good time to have the family visit or have guests over. 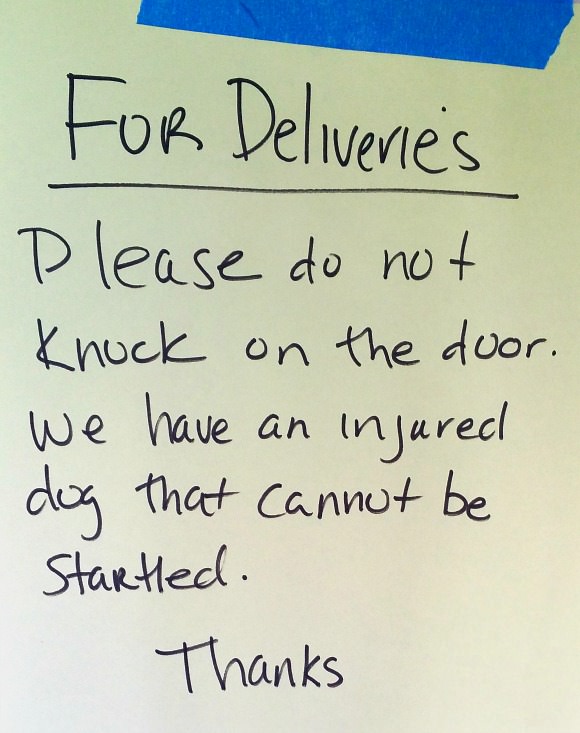 Gretel wouldn’t tolerate this but some dogs do better with a sheet covering their crate.

You can also help drown out noises with music. Anything will help but you can also buy special calming music for dogs.

Keep a Harness on at All Times

Gretel wore this VelPro Choke Free Harness for 8 weeks straight during her crate rest. Whichever one you choose, pick a harness that is loose fitting and comfortable and keep an eye out for chafing and hair breakage.

If you’re worried about leaving a harness on all of the time, you might want to consider switching between 2 or 3 harnesses to keep your dog from getting hot spots.

Your pet is unlikely to mind having it on all of the time, really.

remember to clip a leash to your dog’s harness when you take them out to go potty (you should carry them outside) to help keep them from making sudden moves that they shouldn’t.

Stick with a Routine

Try to keep your dog’s routine as normal as possible.

I put a second crate in my office and put her bed in it. After I carried her in from going potty in the morning, I held her leash and let her lick Chester’s bowl as normal. Then I put her in the crate in my office.

The location of her bed may have changed, but her routine was very similar. 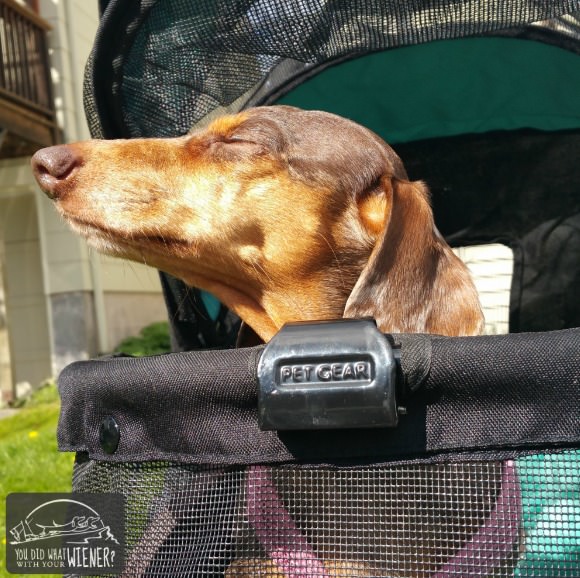 Break Up the Time Inside of the Crate

When Gretel started to get really restless in the crate, I would introduce something new to keep her entertained.

I started training Gretel the touch command where I asked her to touch her nose to my hand and then gave her a treat. It’s something she could do in the crate that was both human contact and mentally stimulating.

Sometimes, before she was able to walk on her own, I would take her for walks in her pet stroller for a change of scenery and to get some fresh air.

Several times I strapped her into her car seat and took her for a little drive.

I also, with permission from her veterinarian, sat with her on the couch in the evening. It was allowed as long as I always had one hand on her harness so there was no way she could jump up quickly, or off the couch.

She was allowed to sleep in bed with me at night too as long as I had her on a short leash that was attached to me (she’s not one to wiggle or get out of bed in the middle of the night so the risk was low).

Remember that a stuffed treat toy is your friend. I tried not to use this trick too often because I didn’t want her to eat too much and gain weight but a stuffed PetSafe Waggle would keep her busy for a good 15-30 minutes.

Find Out What Your Dog CAN Do

Ask for rehab exercises and plan – this will help you resist letting your dog do things they shouldn’t by focusing on things they CAN do safely outside of the crate.

In the first couple of week of Gretel’s crate rest, I focused on massage and stretching exercises while we were snuggling on the couch.

Eventually, she was allowed a couple of 5 minute walks a day.

Later we moved to longer walks plus conditioning exercises on our DogTread K9 FitBone and cavaletti rails.

It’s easy to get caught up in the crate rest process and lose track of time.

Setting weekly milestones helps you remember how long it’s been and gives you a weekly reason to celebrate your dedication to your dog and their progress.

–> See the Full List of My IVDD Articles, Information, and Resources HERE <–

Has your dog ever been prescribed crate rest? How did you get through it?