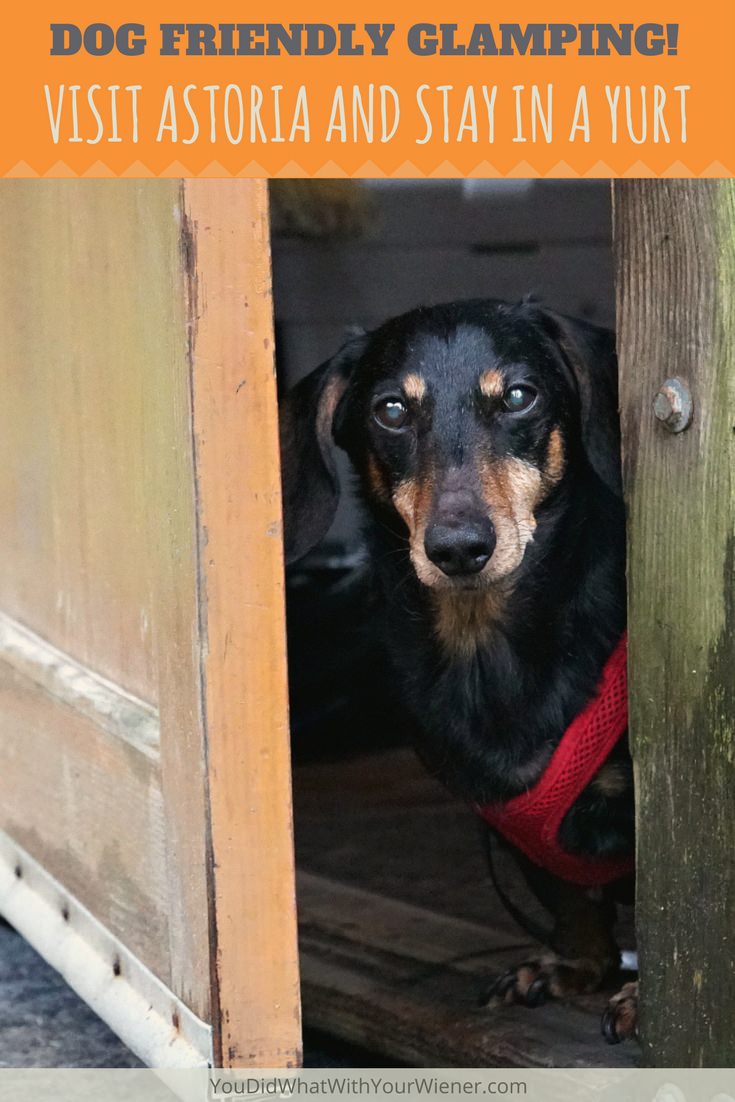 I’ve been wanting to stay in a yurt with Chester and Gretel for a while. So when the Astoria Warrenton Chamber of Commerce contacted me and asked if we wanted to stay in one of the dog friendly yurts at Fort Steven’s State Park, I jumped at the chance!

Fort Stevens was once the primary military defense installation in the three-fort, Harbor Defense System at the mouth of the Columbia River (along with Forts Canby and Columbia in Washington). The fort saw service for 84 years, from the Civil War to World War II.

We’d traveled to the Astoria-Warrenton area in 2011 when Hubby and I bike toured from Astoria to Canon Beach, pulling the dogs in a trailer. I’d never been for Fort Steven’s State Park before though.

The night we arrived, the winds must have been 40 mph or more… or at least it felt like it. It was pouring down rain. Neither unexpected for the Pacific Ocean coast in winter.

Once we found our yurt in the dark, we hunkered down for the night. The winds howled outside and the rain pelted the little yurt. I was super impressed because the sides of the yurt didn’t flap and rain didn’t drip in from the windows or seams. 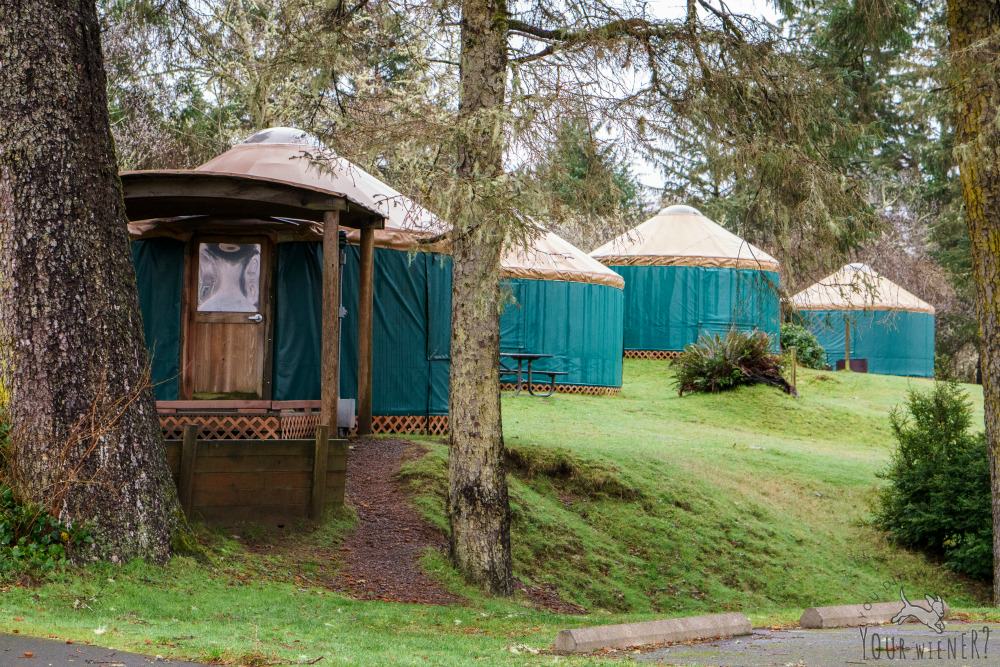 I know some people live in yurts year round but it was great to get confirmation through personal experience that they really can handle bad weather. Occasionally, Hubby and I talk about building one to live in.

The nice thing about the weather on the coast is that, although it can be super stormy in winter, there are often clear breaks in between.

We took advantage of one of these to go down to the beach and see our first shipwreck.

Unlike some “shipwrecks”, this wasn’t just pieces of metal on the beach. You can actually tell it was a ship.

The remains are from a boat called the Peter Iredale and it’s 111 years old! It was a four-masted steel barque sailing vessel that ran ashore October 25, 1906 on it’s way to the mouth of the Columbia River. Everyone on board – 27 crewmembers and 2 stowaways – survived. 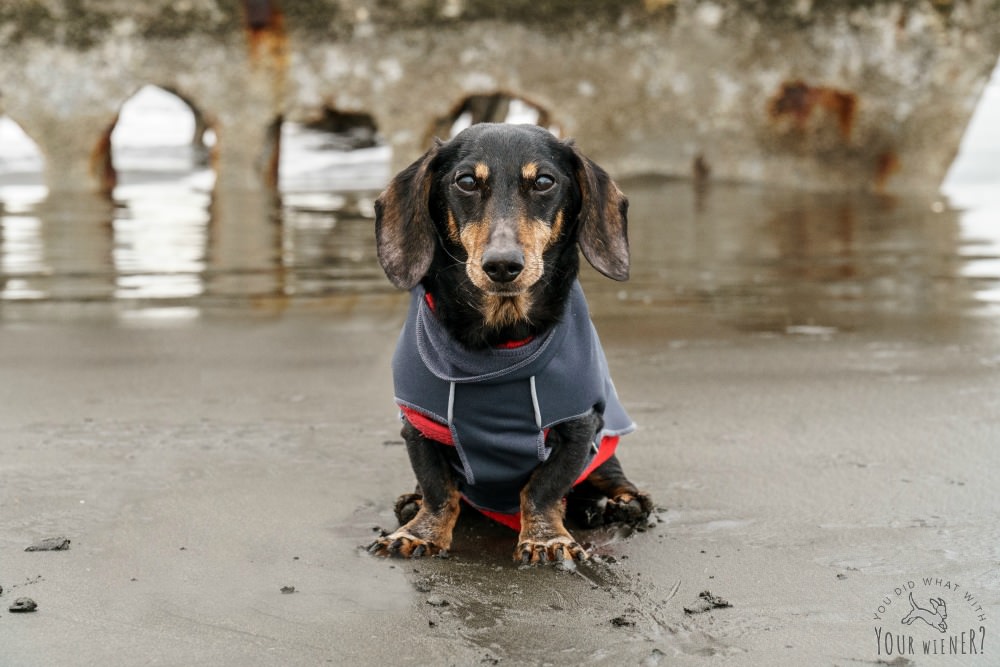 When it started to rain again, we headed into Astoria for lunch at the Rogue Ales Public House. The restaurant is dog friendly in summer when patio seating is available. I hear they even have a special dog menu.

Unfortunately, Chester and Gretel had to stay in the car this time. They were tired from our beach walk though so they happily “time traveled” while we munched on fish and chips.

We made an unexpected discovery while we were there.

The restaurant is inside a converted smoke house for old Bumble Bee Cannery. The rest of the building has been converted to private shops, storage… and a Hanthorn Cannery Museum! That was a completely unexpected surprise.

Several rooms were filled with displays and old cannery equipment. It was neat to explore and it was free!

In the late afternoon, we explored the rest of Fort Stevens State Park. That place is huge!

There are over 475 campsites total (that’s no including the yurts and cabins). The park itself is 4,300 acres and has historic wartime bunkers, a huge freshwater lake, miles of shoreline, 9 miles of biking trails and 6 miles of hiking trails.

We could imagine that a ton of people are there in the summer but the park was so big I wonder if it doesn’t feel uber crowded since people can spread out. Maybe we’ll have to go back sometime in the summer to see.

The next morning we drove to another area of the park to see the military bunkers. It started to rain again so we didn’t stay long but it was cool because they were really well preserved. 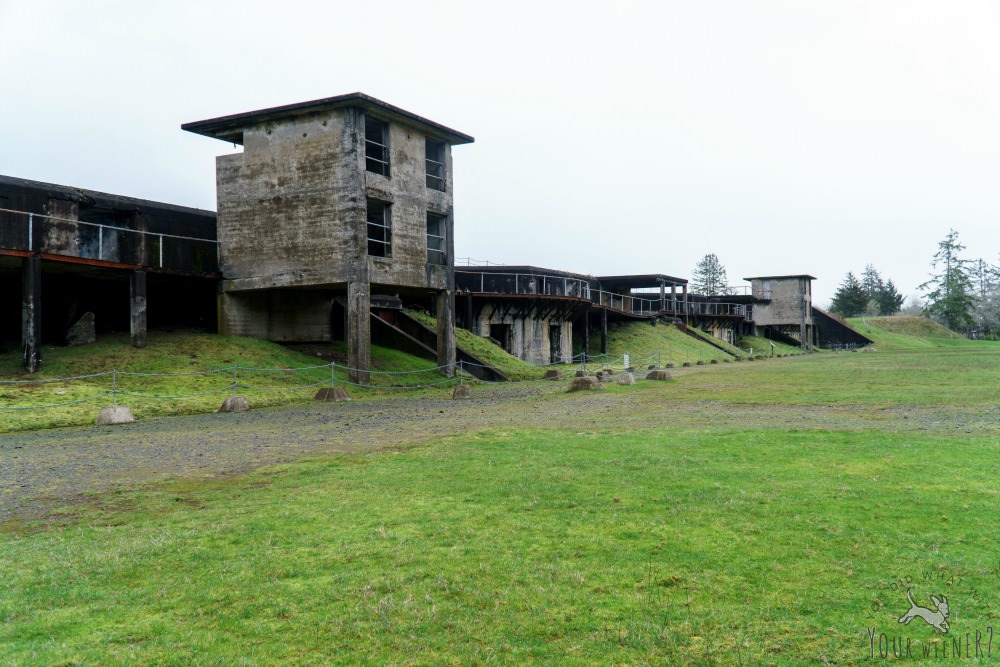 Many of the bunkers had locked doors but you can take guided tours inside some of them in summer. You can also tour the grounds in a historic military jeep.

Before we started the 4-hour drive back to Seattle, we swung through Astoria again to try the fish and chips at the famous Bowpicker.

The last time we were there, I was curious about it but we never stopped. Their claim to fame is that they are take-away dining from an old, converted Bowpicker-style boat and they were the first in the country to serve fish and chips make of albacore tuna (rumored).

They have a couple of outside benches where you can sit down to eat with your dog. The line was 10 people deep and this was in winter. On a weekday!

I hear it’s nuts in the summer so, if we ever go then, we’ll prepare for a long wait and to take our food somewhere else to sit down and eat.

A couple of blocks away is the Astoria Riverwalk Trail. I’d probably look for an empty bench along there or drive up to the Astoria Column and eat with a view of the Columbia River.

Even though we were stuffed, we stopped by Frite & Scoop for ice cream (there is always room for ice cream, right? Ha, ha).

While the line for this place is out the door in summer, we had the whole place to ourselves that day.

The owner was very friendly and told us the story of how he and his wife ended up opening an ice cream store in Astoria, how he makes his French-style custard ice cream by hand and invents all of his own flavors, and about the historic building the shop was located in. 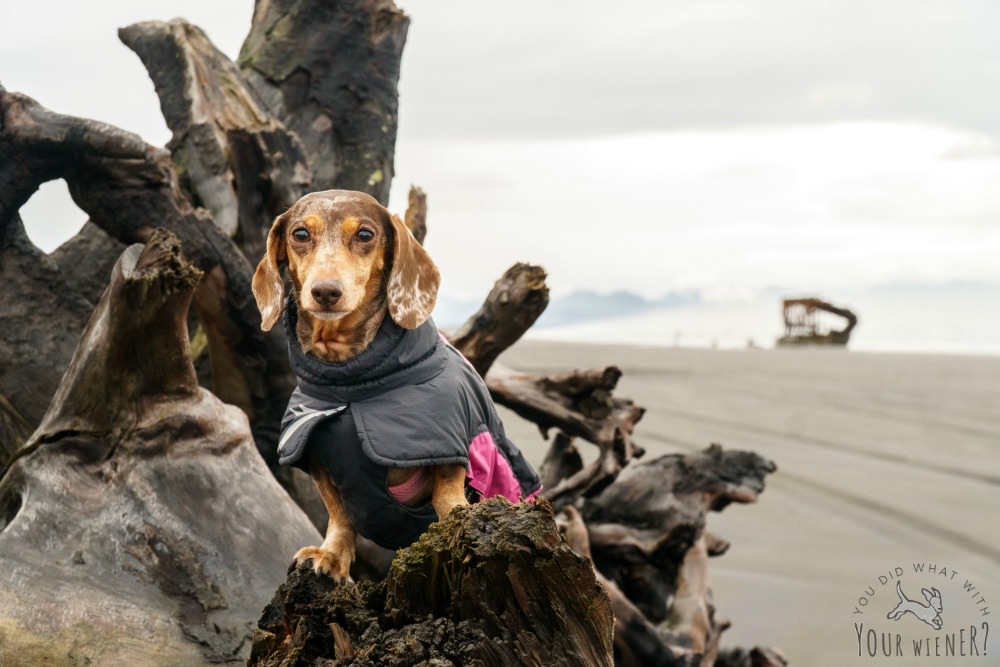 To be honest, I wasn’t super impressed with the dog friendly-ness of Astoria when we visited 7 years ago. However, it definitely seemed like things have changed and there are more options for dog owners now.

I think the “off season” is the best time to visit a place like that. There are few tourists and you get to talk with the locals more than you do in the super-busy summer season.

Disclaimer: Part of our trip was sponsored by the Astoria Warrenton Chamber of Commerce in exchange for telling  you about the area and our trip. This compensation did not influence my opinion of the experience.