I slowly meandered through the woods with Chester and sat on a log. I had things I needed to say to him. Things I wanted him to know.

There was no better setting than in the woods a few miles from my house to tell him. We’d shared almost 16 years of adventure in places like that.

As I held him tight and started to whisper to him, he looked away from me like he was searching for something. He struggled against my tight grasp.

My tears didn’t phase him. Unlike in times past when he would have recognized I was in pain, there was no nuzzle or soft lick to catch my tears.

As soon as I set him down, he started compulsively hunting for food. Looking for that next morsel, even though a lot of what he was trying to eat were little rocks and sticks.

I realized this had become his life.

The only time he had any energy was when he was looking for food and, believe me, he got plenty of food. It was more like a never-ending obsession.

Note: This post was written as part of my grieving process the morning of the day we chose to say goodbye to Chester. It’s raw and largely unedited. Please excuse any typos or grammar mistakes.

Between my friends and our blog fans, literally 100+ people have shared their condolences, their own heartbreaking stories, and their support in the few days between when we made the decision and when it was “the time”.

I talked with several friends on the phone, including those that have been in my shoes and those I knew I could tell exactly how I felt and they wouldn’t judge me.

I read and appreciated every single comment. Every answered call for help and support was invaluable.

BUT, underlying it all, was the feeling that they wouldn’t be so kind of they actually knew what I was doing.

I was killing my dog. For selfish reasons.

They would think I’m a monster.

You see, Chester could still walk. Three quarters of the time anyway and most of that was shaky at best.

He still had so much energy during the 25% of the time he wasn’t sleeping.

Like when he was barking compulsively and running around like a madman demanding food… whether it was actually dinner time or not.

Or between 2 am and our 5 am breakfast time.

He was so agitated during that time that I couldn’t get more than 10-15 minutes of sleep here and there in those wee hours of the morning.

Or if he had to pee, which he would do two steps from the dog bed without a thought. Thank goodness for diapers early on or our relationship wouldn’t have made it this far.

BUT, there were also things that were happening now, and writing I could see on the wall, that led to my decision.

A year and a half ago when he first began to pace and demand bark, and I could finally tell for sure that he had doggy dementia, I started giving him Hemp CBD on a regular basis.

That, in combination with Vetriscience Composure, was enough to manage his anxiety and get him to calm down.

We tried the suggested supplements and medications recommended for canine cognitive dysfunction and nothing seemed to make a difference.

Fast forward to 6 weeks ago and, out of desperation for his wellbeing and mine, I asked our vet for heavier drugs to make him sleep through the night.

They worked in that they would definitely knock him out. EXCEPT for when his hunger drive kicked in at 2 or 3 am. Nothing put a dent in that.

I liken it to an animal, like a deer, that is almost dead in the woods. But, oh boy, if you go to touch it you will be in for a big surprise as it’s fight or flight adrenaline kicks in and it jumps up and tries to stomp you to death.

It’s an instinct thing. Not a thinking thing. Or even any indication of physical health.

As our veterinarian said, “His little reptilian brain is taking over. He’s animated but it doesn’t mean he’s mentally there. A lot of what he’d doing could just be instinctual impulses.”

The other thing was that the medication did definitely help him be less restless in his sleep and sleep maybe an hour later than he normally would.

But, between when the meds started to kick in and we went to bed, it turned him from “I’m really shaky on my feet” to “I can’t walk because my back legs won’t work.” It was heartbreaking.

He was falling a lot more often though, even without the medication.

Up until 6 weeks ago, it was clear he had dementia but he generally knew where he was. We remained hopeful and optimistic about his condition.

But then we started to seeing these advanced dog dementia signs:

If he did turn up the walkway (usually by being directed) he would run right past the front porch steps into the breezeway between us and our neighbor’s house. We’ve never walked down that way in the 10 years that we’ve lived here. 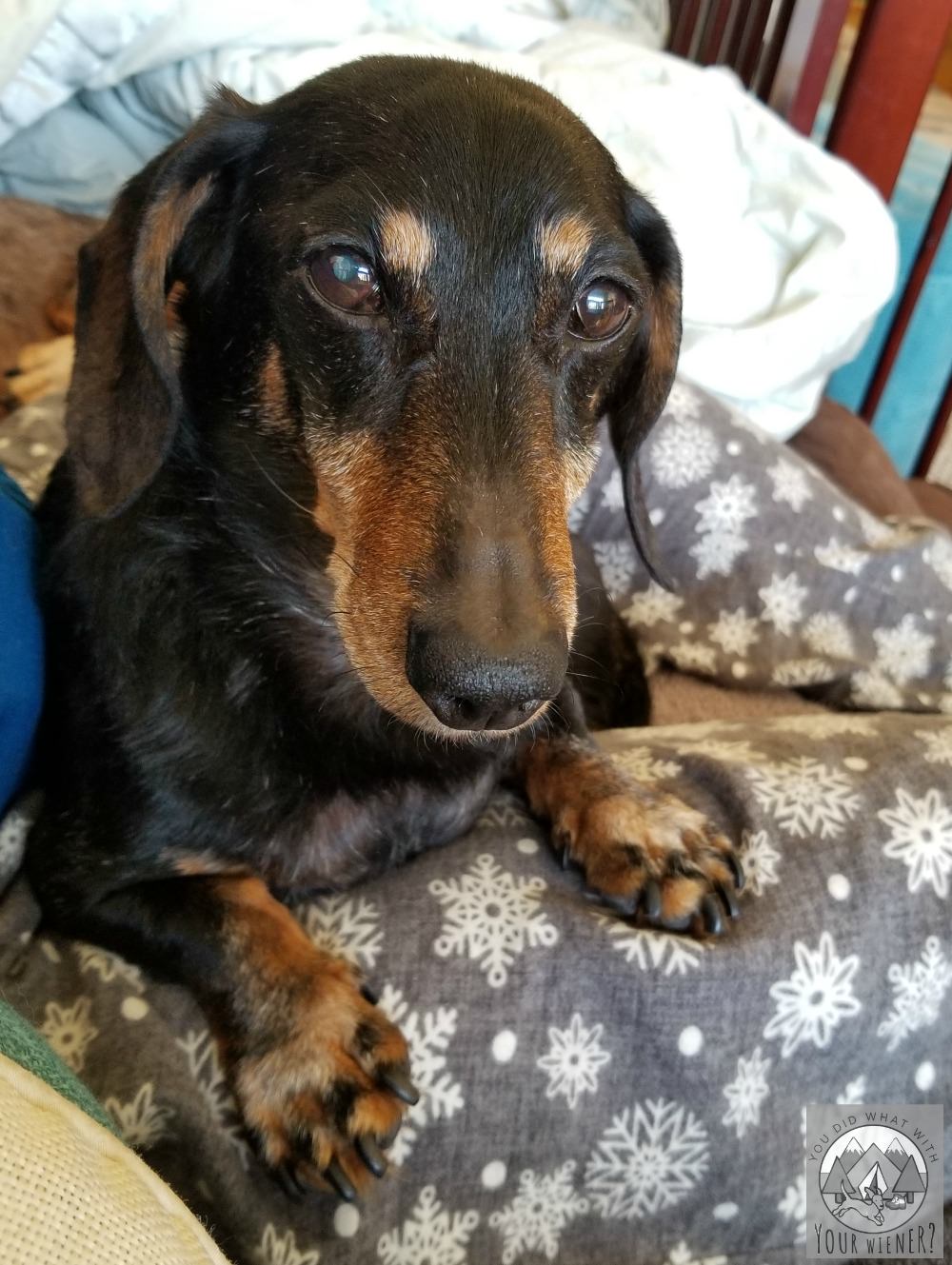 I spoke with our vet about all of this and she said, unfortunately, it was only going to get worse.

I Can Beat Myself Up Better Than You Can

These are the “selfish reasons” for letting him to that run through my head.

The ones that I beat myself up for and that literally make me want to throw up.

I don’t want to wait to put him down until it’s too late – until he doesn’t recognize us anymore.

With how rapidly his mental capacity has declined in the last 6 weeks, that could be tomorrow or next week.

I wouldn’t be able to stand it if one day I walked up to him and he didn’t know who I was. Or worse. Was afraid of me.

His relentless barking and pacing we couldn’t seem to do anything about, the almost 6 months of waking me up before 5 am more than once (it’s progressively gotten worse), and the daily peeing on the carpet at least once, frustrates me.

There, I said it! Sometimes I get mad at him.

I admit I’ve even yelled at him.

My heart is broken after because I know he doesn’t deserve it.

He’s not doing what he’s doing because he’s “bad” or to make me mad. He’s slowly losing his mind and he can’t help it.

But I’m at the end of my rope.

This journey with my old man has helped me find patience and compassion I didn’t know I had. After each breakdown, I picked myself up again with a new plan.

We changed the way we did things. We tried new things. I stretched.

But I’ve stretched as far as I can go. I’m starting to go backwards. My compassion and patience is waning.

I don’t want to wait until the rope breaks and I’m frustrated when we choose to let him go.

Which brings me to the other thing: Gretel has been acting different for the last few months.

I love Chester to the moon and back but Gretel is my everything.

We’re like two peas in pod. Her happiest place is with her Mama. But not so much lately.

She’s been distant. She’s spent more time laying in her bed across the room than in my lap. She doesn’t seem as in-tune with me as she usually is.

At first I blamed myself. I had to be the only cause behind this behavior change.

She’s a sensitive soul so me getting frustrated at Chester, and always being sad or on edge at least a bit, has to be the reason she’s acting different.

But these last 6 weeks, during Chester’s decline, I’m seeing that maybe it’s not all me.

She was never close with Chester but they peacefully coexisted.

She has growled at him several times for trying to get on the couch when she’s up there or into the dog bed next to the one she’s laying in.

I know that can be a sign that she knows something is wrong with him. That could be why she is acting different too.

All of what is happening – whatever that exactly is – is affecting her.

She’s starting to become a different dog than what I know and the only thing that has changed is what we’re going through with Chester.

This Isn’t My First Experience with Death and Loss

One of my friends, who is going through a very similar thing with her own Dachshund, said “This is it. We’re in hospice care now.“

Another thing I have been struggling with is the balance between all of the medical technology that’s available out there for me to “help him” and letting him to with dignity.

I’ve been “fortunate” enough to have gone through this grief-filled, emotional bucking-bronco many times in my life though.

As my Step-Mom put it, “[I know] it feels like grief is always around the corner for you sweetie“.

I can do this. If there is one thing I know how to do, it’s grief and loss.

Well, kind of. This is my first experience going through it with a non human family member as an adult.

My family is practical when it comes to matters of death.

We care and feel deeply but we also know that death is inevitable.

All of my family chose some combination of no or minimal treatment to prolong life.

I had an epiphany the other day.

I was beating myself up for not doing absolutely everything I could to prolong Chester’s life. But my family never chose that. And he’s just as much family as they were.

The difference is that I have to make that decision for him. He can’t tell me what he wants.

But I can guess, because he is a part of this family, that he would want the same.

In each case of family death I’ve experienced, it was excruciating watching them decline knowing that the end was inevitable.

Sadly, most of them were around “too late” – past the point that they would have wanted to stay and suffering past the point we wished they had left us at.

Although it’s a source of great guilt, I have that choice with Chester.

He’s declined to a point where he’s just existing. I don’t want to wait until we’re just helping him barely hang on.

I want to let him go before we were unable to celebrate his final days with gourmet strawberry ice cream topped with bacon because he wouldn’t eat.

Let this be the best, last, most selfless thing I do for him. And let me find peace in that.

All of the kind words from friends, family, and fans are giving me the strength to do it. Because I want to run. And barf somewhere.